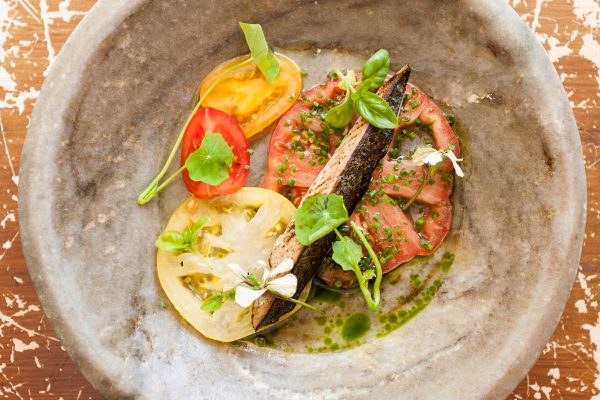 With a musician for a father and a dancer for a mother, Dublin-born Robin Gill never really thought about food at a young age. Despite regular trips to his auntie’s farm in Cork during the summers of his youth, he got halfway through an arts degree and took on an apprenticeship as an electrician before deciding to become a chef. ‘I was always cooking at home, and two of my good friends were chefs,’ he explains. ‘They suggested I do the same, and I only said yes to make them happy. But the second I got into the kitchen and experience the thrill of service I knew it was for me.’ Being based in Dublin meant Robin’s career progression was quite limited, so he decided to look further afield. ‘The dining scene in Dublin wasn’t great – there were only three or four restaurants of note at the time,’ he says. ‘My two friends moved to London to work in Michelin-starred places, so I followed them over. I had the Michelin Guide in my hand and went round to every restaurant asking for work until I finally landed a job at Marco Pierre White’s three-starred The Oak Room, which was a massive leap – I learnt all the ins and outs of classical cooking, how to be disciplined and very precise cooking techniques. The first three months were hell but a complete eye-opener.’

The Dairy, The Manor, Counter Culture

"Nishan showed us the most cool and interesting space we'd come across in East London, we had to take it."