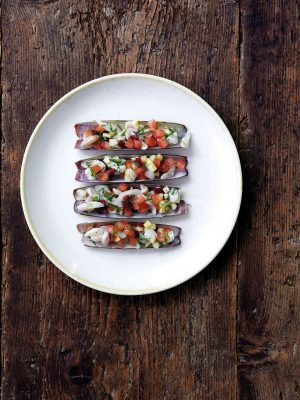 In 2004, Jun became the Executive Chef at Pearl Restaurant & Bar – the showpiece of the Renaissance Chancery Court Hotel in Holborn – where he developed and refined a unique, modern take on traditional French cooking: a precise and sensitive approach that focused on showcasing and accentuating the very best seasonal ingredients. During his tenancy at Pearl, he was awarded three AA Rosettes. Jun’s first cookbook Simple to Sensational was published by Simon & Schuster in 2009. Jun’s career in television dates back to 2006, when he presented his own series, Cooking It, on Channel 4. He has since been a regular on BBC1’s Saturday Kitchen, UKTV’s Market Kitchen and BBC2’s Something for the Weekend, and appeared on various other shows such as Masterchef, Michel Roux Jr’s Food & Drink, and Food Network US’s Chopped, where he won the title of Chopped Grand Champion in 2013. In 2010, Jun launched an innovative street food business Street Kitchen with his friend and business partner Mark Jankel

What the critics says

There is a precision and, at times, an understated brilliance to this restaurant which does set it apart.  Let’s put it this way: I don’t think Tanaka need move on to his 10th establishment any day soon.

"As most chefs will tell you, finding a decent restaurant property in London is incredibly competitive. It has been very challenging trying to secure the perfect site but with the support and determination of Dean, we battled on. The end result has been worth the wait."